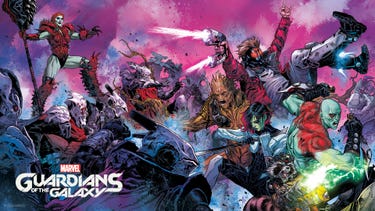 After releasing an epic score and a space metal album for Marvel’s Guardians of the Galaxy, you’d think Composer Richard Jacques and Senior Audio Director Steve Szczepkowski would stop there? Flark no.

We’re thrilled to present you with “Marvel's Guardians of Galaxy: Welcome to Knowhere”, a brand-new Soundtrack EP that will take you right back to one of the most iconic, intriguing and fun locations in our game. Vibe to the alien techno of Knowhere's dance club, to the haunting industrial sounds of Mantlo’s Bar and the new age soundscape of the Collectors Emporium. Also featured are the Spaghetti Western influenced “Showdown With Lipless” as well as “The Huddle”, the anthemic power up music that supercharges the Guardians into combat. We sat down with Richard Jacques and picked his brain about his and Steve’s inspiration to bring every corner of Knowhere to life through music.

What was your first impression of Knowhere when you were introduced to it?

I was amazed at the art direction when I first saw Knowhere – the attention to detail in all different areas, from the marketplace, through to all the bars and clubs, the Collector’s Emporium and leading up to the Rift viewing platform is just mesmerizing. It already seemed like a living, breathing space port and I was excited about the possibilities of bringing further life to the environment through music. Just looking at the concept artwork provided me with a huge number of creative possibilities!

What was your overall approach for the music in Knowhere?

I wanted each main area that the player visits to have its own signature music track. For instance, the minute the elevator arrives at the marketplace in Knowhere, there are a couple of alien creatures dancing in front of a stall. These ideas use unlikely combinations of musical styles, something that you would not necessarily expect, unless you are visiting Knowhere. The music needed to feel like a part of each area, so for example there is club that you walk past that is booming out ‘alien techno’ which uses a strange musical scale to make it feel ‘other-worldly’, if you will.

For some of the set piece locations, such as Mantlo’s Bar (which happens to be Rocket’s favourite), I wanted this location to feel like a real bar which is inhabited not only by our bunch of misfits, but also with some rather dubious characters. Various vintage analogue synthesizers were used in the creation of the music from Knowhere, as well as unorthodox tunings and experimental sounds and electronic processing effects. In essence, I wanted to make Knowhere feel alive, and the music works hand in hand with all the alien creature sounds and stunning artwork to achieve this.

Knowhere has its own sub-areas, from the market to the Collector’s Emporium – tell us about how you made it as musical journey for the player as well.

It was important that all the sub-areas were also populated with music, even if players didn’t get to visit them on their first playthrough. The Collector’s Emporium is a museum which holds artifacts from across the Marvel universe, so it was essential to make a feature out of this, and the music that accompanies your visit to the museum is an ambient new age type track, featuring various unusual ethnic wind instruments, giving a feeling that could easily be routed in historical various settings.

Lipless’ scene is quite unique, and music obviously had its role to play in making it memorable. What motivated this particular choice of music?

This optional encounter is one of my personal favourites in the game. I understand that the development team had been playing around with this idea from an early stage, but it all came together toward the end of the development process. Lipless is a character that is deeply terrifying yet highly entertaining, and the music needed to reflect the latter.

In discussion with Steve Szczepkowski, Senior Audio Director at Eidos-Montréal, we came up with the idea of making this scene like a showdown you would get in a Spaghetti Western movie. The music is actually based around our main Guardians theme, yet in this setting it definitely doesn’t take itself too seriously.

How did the music for the Huddle come together?

When I first saw The Huddle, I once again worked closely with Steve to get some initial conceptual ideas. This section of gameplay is where the player (Star-Lord) gives a ‘team talk’ to the other Guardians, a motivational speech to boost their confidence for the incoming combat, if you will. We thought that it was similar to a sports-style huddle, and therefore chose to create a build-up track using anthemic stadium-type drums and guitars with a crowd chant. This will then prepare the player for what is about to come!

The Marvel's Guardians of Galaxy: Welcome to Knowhere EP Original Video Game Soundtrack, the original score of Marvel’s Guardians of the Galaxy and the Star-Lord band’s album Space Rider are all available via this link.

Marvel's Guardians of the Galaxy is out now on PS4, PS5, Xbox One, Xbox Series X|S, PC and Nintendo Switch.