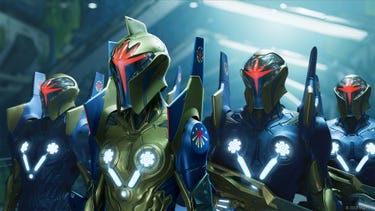 Twelve years ago, the Galaxy went through the Galactic War, leaving planets and people broken. In our story, Star-Lord and the Guardians joined up less than a year ago and are trying to behave as a group. Not gonna lie, they’re not there yet.

When our adventure begins, a bet between the Guardians goes awry and triggers chaotic events that pave the way for the Universal Church of Truth to set their evil plan in motion: their goal is to bring the “Promise” to everyone in the galaxy, claiming that it will bring back everything that was lost. Does it sound shady to you too?

The Church is gaining power quickly, and the Guardians realize they need to step up. But they’re outnumbered, and they’ll need all the help they can get. Enters Cosmo, an old friend of Star-Lord’s, who is the Head of Security of Knowhere. He also happens to be a telepathic space dog. You’re going to love him! Knowhere is his home, and he’ll go to great lengths to protect it.

The Guardians will also deal with the Nova Corps, the galaxy’s peacekeepers, who are led by a supercomputer called the Worldmind, an entity that preserved all the memories of the Xandar population. Obviously, getting their help won’t be easy.

As the Guardians start their fight to save the galaxy, Star-Lord will make an incredible discovery: his elemental blasters are more than a random weapon, and he actually has a special connection with them. This will come in handy when Star-Lord and his team face impossible situations, as he will learn how to use and control their power to their full extent.

And if, just like us, you’re into '80s rock, you may have picked up on the song playing during the trailer: “Space Riders (With No Names)”, a brand-new track from the Star-Lord band! Peter Quill loves them so much that he got his cosmic name from them. And the best thing is – you can listen to the single right now! It’s available on Apple Music, Spotify and more right here.