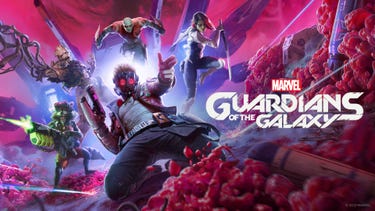 It’s happening. Marvel’s Guardians of the Galaxy is coming October 26, 2021 to PS5, PS4, Xbox Series X|S, Xbox One and PC! Developed by our team at Eidos-Montréal in collaboration with Marvel Games, this fresh take in an all-new Guardians universe is a story-driven, single-player, third-person action-adventure game. Get ready to fire up Star-Lord’s jet-boots. This is going to be a wild ride.

Imagine this: leading a group that’s composed of the deadliest woman in the galaxy, a war hero/convicted outlaw, a raccoon with a penchant for explosives and his best friend that happens to be a powerful force of nature. You’ll be at the center of everything as you call the shots for your unpredictable team through combat, exploration and the story itself. Tears will be shed, laughs will be had… and bad guys won’t know what hit them.

Also, the fate of the galaxy will be in your hands. No big deal.

In our game, the Guardians have been together for less than a year and scour the galaxy in search of adventure – and profit. Deep down, they’re also trying to leave behind the memories of a galactic war that took place 12 years ago. This group of misfits is their hope for a fresh start.

One day, they explore a restricted area of space filled with space debris, in search of a valuable monster and hoping to make a killing. The Guardians being who they are, they goof around with a bet that’s just crazy enough to end up going spectacularly sideways.

Turns out this bet wasn’t all that harmless, and they soon realize they’ve set off a chain reaction of catastrophic events. Under Star-Lord’s (approximate) leadership, the Guardians will go from one end of the galaxy to the other to make things right – and ultimately become family.

For more info, check out our Deep Dive  and Gameplay First Look videos. You can also pre-order your copy right here